It is a joy to see a colorful, glossy-feathered, fluffy-butted hen. 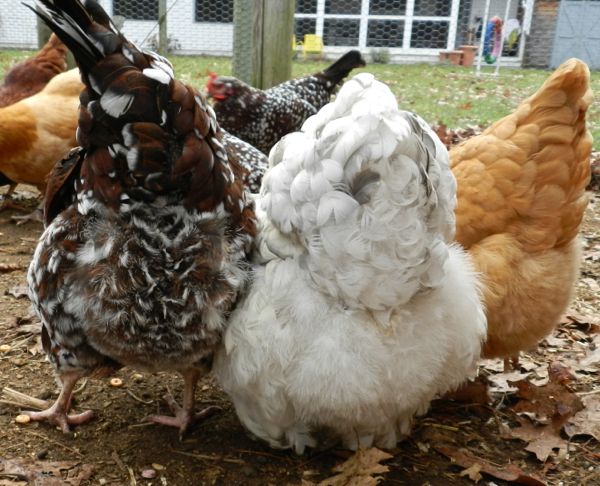 Chicken skin, on the other hand, is not pretty. It’s a sad yellowish or brick color, and bumpy. When irritated it’s a painful-looking red. Chicken keepers become worried and upset and when see it.

There are many reasons why your chicken might look bare, and several of them are of no cause for concern. Once a year, a mature hen molts – all of their feathers fall out and they grow new ones. Some hens go through a dramatic molt during which they turn almost naked over night. Others just look unkempt. For more about molting, see this post.

When a hen goes broody, she’ll pull out her breast feathers so that her skin is in contact with the eggs. If you have a bad-tempered, bare-chested hen sitting in a nesting box, she’s healthy, but broody.

One clue to what is amiss is where the bare spots are. If you have a rooster, you’re likely to see feather loss around the neck and back, due to the rooster pulling out and shredding feathers when he treads the hens. Sometimes the rooster favors one hen, so that her saddle (back) feathers get worn off, while all of the other girls look lovely. If there are open wounds, or her skin is so red that the others peck at her, you’ll have to separate her, or get rid of the rooster.

Sometimes hens develop scraggly bare patches. This is not necessarily due to illness. Every year, a couple of my best layers lose their neck feathers and go bare near their vents. It takes a lot of protein and energy to make feathers, and these hens put their resources into egg laying instead. It is perfectly normal. 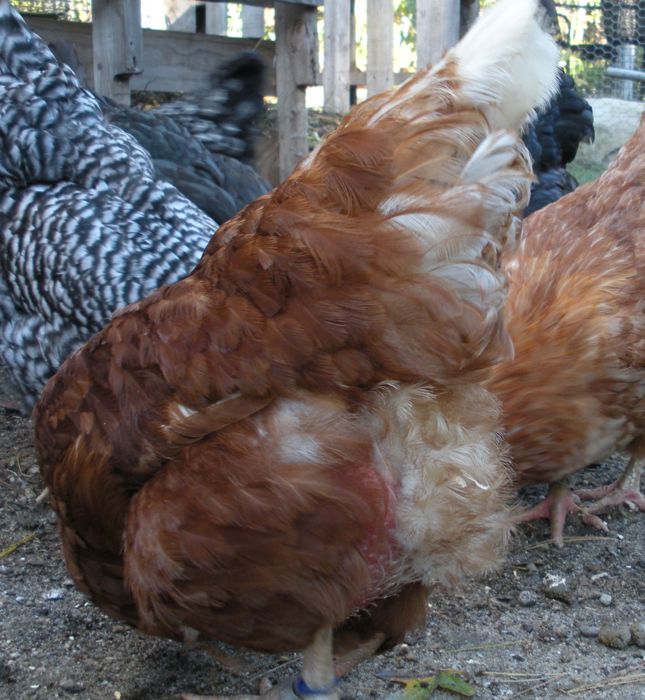 But, if your hen has irritated, raw, bald areas, especially near the vent, take a closer look for parasites. Pick up your birds and examine them closely. (To learn how to do this, watch my youtube video.) Feather loss can be due to external parasites, typically lice, or sometimes mites. A louse infestation is first seen near the vent. There will be bare skin, and the feather shafts will look like Q-tips. You might see the lice crawling about.  I’ve written about lice here. Mites are nighttime blood suckers, the size of pins. You’ll see dried blood and rawness near the vent.

Once in awhile, there will be a feather-picking hen in the group. You might never catch her in the act, but she’ll peck away at the other hens’ feathers, until, one day, you notice bare spots and possibly blood. Some feather pecking is due to aggression. In other cases, the culprits are pecking the feathers off to eat them. Usually you’ll see the bald areas near the vent or at the base of the tail. Once a chicken is pecked at, the behavior escalates because all hens will peck at red skin. So, it’s important to catch and stop this behavior quickly after you notice it. 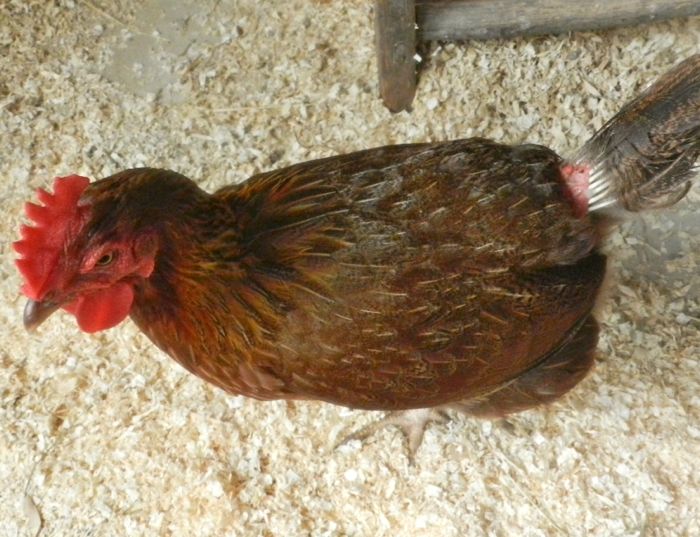 Once hens get into the bad habit of feather picking and eating, it is hard to stop, but possible. The first step is to darken the afflicted hen’s skin, which reduces the cannibalistic behavior. You can dye the skin with blu-kote (similar to gentian violet in the UK.) It dyes the skin purplish-blue, so the hens don’t peck. (Use disposable gloves when doing this, as it will also stain your skin.) Feather eating can occur because the hens need more roughage and more protein in their diet. It can also start because of boredom and crowding. So, make sure that they have access to oyster shell and grit. Reduce empty calorie treats like cracked corn and stale bread, provide greens and interesting things to eat like melons and squash. Also take stock of your housing. Is there enough space and access to feed for everyone?

Sometimes, everything is fine but there is still feather picking. In the case of Jasper, the hen seen in the photo above, she lets the other hens pick her tail feathers off. Jasper is a dominant hen and she could stop this behavior if she wanted to. Blood is never drawn. It’s an odd habit, but I ignore it.

Some hens lose feather near their vent because they have a continual stream for thin diarrhea. This might be vent gleet, which is an intractable yeast infection. I’ve written about it here.

On the other hand, feather loss combined with a swollen bottom that feels like a water balloon can be any number of dire diseases, from cancer to egg impaction. You’ll know if there’s an underlying ailment because the hen will show other symptoms, like an odd, penguin-like walk, tiredness, and a lack of appetite. Without those additional clues, feather loss is rarely a serious problem.

Sometimes, you never know why a hen has raw, red, rough skin. I have a Barred Rock who developed what looked like a rash. For a while the skin was hot to the touch and she walked with stiffness. She lost all of her butt feathers, which never grew back, I bathed her and used povidone and she moved with less discomfort, and the skin thickened but remained red. Two years later she still has a bald bottom, but is otherwise fine. Sometimes feather loss is a mystery.