What’s for dinner? There’s not much in the house. The refrigerator is almost empty. There are basic ingredients in the freezer, but well, there’re all frozen.

I have two-thirds of a loaf of homemade bread a day past its prime. 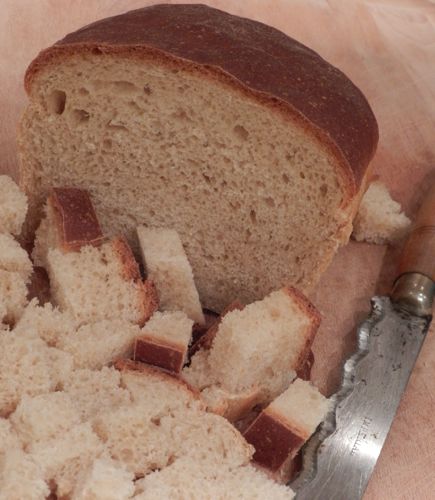 Thanks to the Gems, there are eggs. 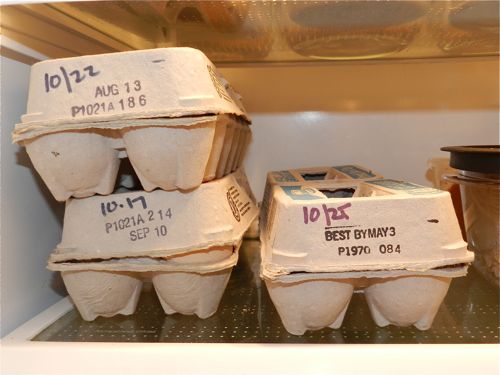 There are a few apples left from our visit to an orchard three weeks ago. 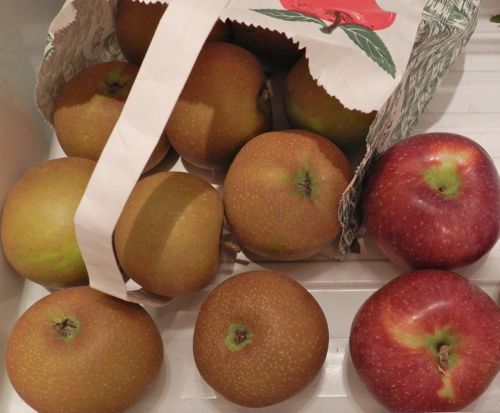 I’ll make a bread pudding, which is a fall-back recipe that everyone should have in their repertoire. This is what to do:

Cut the bread into cubes. If I toast them until dry the bread will hold it’s shape while baking. But, I like a soft custardy-custard, so I’m not going to bother with that step.

I put the batter ingredients into a mixing bowl and whisk together. The basic proportions are: 3 cups of milk, 1/2 cup sweetener, 6 eggs, 1/2 teaspoon of salt.

I use 1% milk. I actually like bread pudding made with lowfat dairy – cream is too heavy for my taste. For sweetener I combined honey and brown sugar, but this is flexible depending on the fruits used. Other times I might use sugar and maple syrup, or all white sugar. For Apple Bread Pudding, I’ll stir in a half-teaspoon of vanilla, too.

I get out 4 apples. I use my nifty hand-cranked gadget that, in a few turns of the handle, peels, cores and slices. I toss the apples in with the bread and add a handful of plump organic raisins. It all goes into a ceramic casserole. I pour the custard on top and press down so that the bread cubes are immersed in the batter. Let this sit so that the bread absorbs the egg mixture. Preheat the oven to 350ºF while the pudding rests.

While waiting for the oven to warm up, I take the apple peels out to the goats. My gadget makes long strands, which the goats like to slurp like spaghetti. This might be the best part of making Apple Bread Pudding. Notice Caper’s tail wagging with happiness. 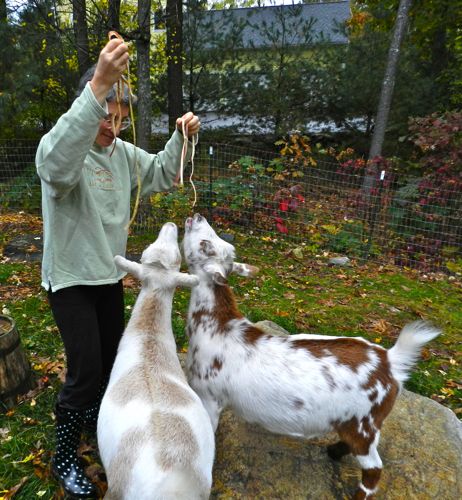 Dust the pudding with cinnamon. Bake for about 45 minutes until the top begins to brown a bit and the custard is set. Lowfat milk batters are a tad watery and will take longer than if you use whole milk or cream. When you press on the surface you shouldn’t see any liquid ooze out. It should feel bouncy.

I’ve been reading diaries kept by a New York state farm family back at the turn of the last century. Supper was often what we’d consider dessert. They sometimes ate cream and berries for their evening meal, or had shortcake, or pancakes. This recipe, filled with eggs, which were precious back then, would have been an extravagance. But, they did love their ice cream, so I’ll have some, too. 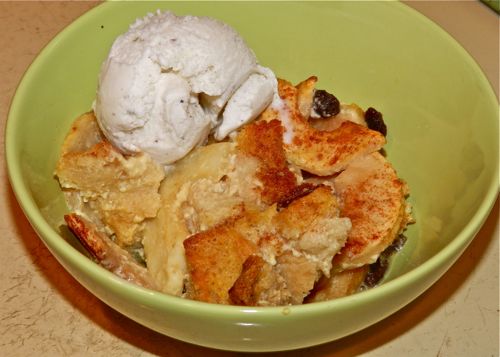 Leave out the sugar, add cheese, and you’ll have a savory dinner, sometimes called a “strata.” No doubt I’ll be scrounging around the in the kitchen soon, thinking there’s nothing in the house to make for supper, when I spy the eggs and the bread and know that something easy to make and delicious is right there in front of me.

I’m the author of four cookbooks, a James Beard Award nominee, and have cooked professionally. All of the recipes here at HenCam were developed, tested and written by me. I’m inspired by the vegetables in my garden and the eggs from my hens, but I also use products from further afield. Although I love to cook, I don’t want to spend all day in the kitchen, so you’ll find streamlined recipes that will get you cooking, but that will also give you plenty of time to relax and enjoy the food.