The vet just called with very interesting lab results. They go to show that it can look like a duck, quack like a duck and walk like a duck, but not be a duck. My hens did not have Mycoplasma. They had foamy, shut eyes and respiratory distress and one died, all textbook symptoms of Mycoplasma – but they had a different infection. Despite $137 worth of lab tests, we’re still not sure what they did have, but we know what they didn’t. The tests were conclusively negative for Mycoplasma. There was a slightly elevated level of E. coli and gram-negative bacteria. Perhaps one of those, or both, caused the symptoms. Perhaps not. Fortunately, regardless of the cause, the treatment worked.

I’m of two minds about how worthwhile those tests were. Obviously, since I’m just getting the results back now, the knowledge they provide isn’t timely. If I’d waited to make treatment decisions based on the tests more hens would have died. However, if the Tylan and doxycycline weren’t effective, it would have been important to confirm exactly what infectious agent we were fighting and the cultures would have been worth the expense. In the end, for me, it’s worth it to find out what I didn’t know. I’ve a responsibility to you, my readers, to get it right. So much of what we think is going on with our flocks’ health is pure conjecture. In this case I’m pleased to know a tad more than I did before.

There’s always something going on here, but I’m hoping that we’ve seen the end of the major storyline of the last two weeks – the outbreak of a deadly respiratory disease in the HenCam flock.

Among domestic farm animals, contagious diseases can hit fast, spread even as you isolate the first animal that shows the symptoms, and kills before you have a chance to weigh your options. Ask a farmer. Everyone has a story to tell. Backyard flocks are not immune. Wild birds fly in and out of the coops, snatch food from the feeders and leave bacteria, viruses and parasites behind. Factory farmers use this as an excuse to confine birds indoors, but that causes other health issues and is one reason why those farmers rely on sub-therapeutic feeding of antibiotics. I believe that the good of an outdoor life outweighs the risks. My chickens will remain outside.

I don’t know why Lulu came down with mycoplasma, and I don’t know why of all of the hens, that she was the one most susceptible and the one to die. I do know that more chickens would have succumbed if not for antibiotics. Siouxsie and Maizie were both on the brink. Thank goodness for drugs. Unfortunately, the drug that used to be prescribed, and was highly effective, Baytril, is now prohibited for poultry. Why? Because those factory farmers fed it to their chickens to get increased production. They got that, plus antibiotic-reistant bacteria that was passed along to consumers, which is a huge health threat to humans.

Luckily, there’s a vet nearby who dispenses drugs for poultry. She provided doxycycline in pill form for the two sickest birds, Maizie and Siouxsie, and Tylan to put in the drinking water for the rest of the hens. Because Candy often drinks from their fount, we kept Candy in her hutch. Many of you were worried about her. Candy was a bit bored but it really and truly wasn’t a big deal. We let her hop around at night after the hens went to sleep.

The hardest part of giving drugs to the hens isn’t getting a chicken to swallow a pill (easy! Perhaps I’ll do a YouTube video,) it’s throwing out the eggs for thirty days after treatment with doxycycline. That’s how long it takes for the drug to clear their systems. Isn’t this sad? 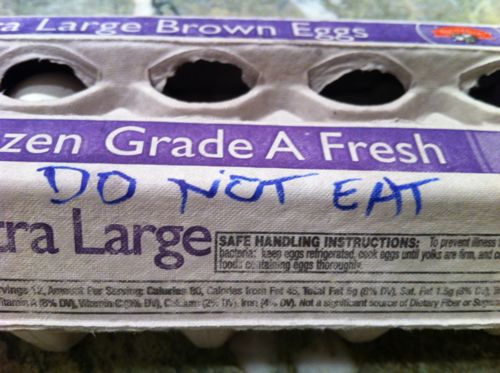 The antibiotics and the stress caused the hens to lay thin-shelled eggs. Broody Coco smashed two in her desire to sit on them, which covered her with sticky yolk. This is not a side-effect mentioned on the drug’s package, but one to be aware of! I gave her a bath. Which she liked. Especially the blow-drying. 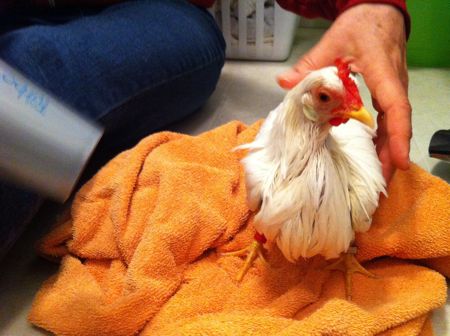 We were very concerned that the chicks would get Mycoplasma, so we instituted strict biosecurity. My new pink Wellies were worn when doing the Big Barn chores. Old red boots were worn in the HenCam coop. I didn’t handle the chicks. I didn’t let the hens from the infected barn wander anywhere near the chicks’ pen. It worked. The chicks never showed symptoms. And now the older, affected hens look fine – even Maizie and Siouxsie who were both near death.

The chicks not only didn’t get sick, but they have been robust and growing. At five weeks they are almost rid of their down, and colorful feathers are growing in. These chicks came in an order of 25, which I shared with friends who live up the road from me. A whole lot of the chicks were yellow fluff balls when they arrived and we couldn’t tell them apart when we divvied up the package. I’d ordered two Delawares, which start out yellow but become gorgeous white birds with black collars. My growing flock didn’t show any signs of developing white feathers, but Ken had two in his brooder. So on Saturday I swapped what I believe to be his two Buff Chantecleers that I’d been raising, for one Delaware. He had another white chick, but he’d become attached to the pretty girl, so I left her there. 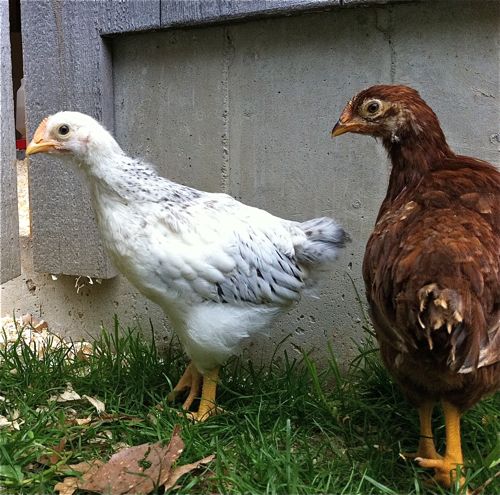 Isn’t she lovely? I confess to taking the nicer of the two, but Ken got two nice pullets in exchange. So I don’t feel too bad about the trade. (And he’s still talking to me, so I think all is settled.)

Meanwhile, the little blue chick (who will likely be named Little Blue because that’s what everyone calls her) is still weak and still half the size of the others. She walks funny, too, and I think it’s her cochin feet feathers tripping her up, so I trimmed them. It seems to help. I know Little Blue is okay, though, because no one picks on her and she has no trouble being with the others. See? 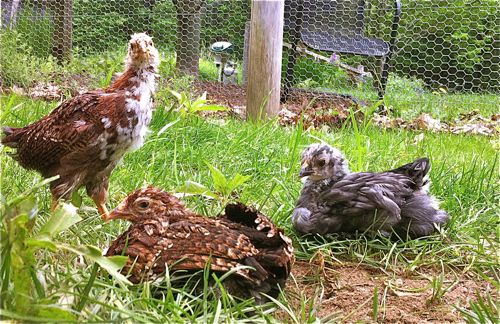 I still don’t know what breeds the others are! Supposedly I have three Speckled Sussex. If I do, they’ve got markings not accepted by the American Poultry Association show standard. Look at that white breast on the one standing.

I’ll be naming them all after gemstones soon. Steve thinks that Little Blue should be called Hope Diamond. It’s a nice thought, but she already has a name that’s stuck. That happens sometimes.

I’m feeling out of sorts. I’ve got a dozen different writing projects on my desk. None have a deadline. Just ideas and manuscripts and pipe dreams to pursue. I should make an action plan. Have a list of priorities. I confess to a bit of the blues.

Three windows wrap around my desk, and there’s a door to a porch. It’s sunny. Downright hot. But there’s a breeze. I can’t focus.

So I take myself outside and note all of the blues out there. 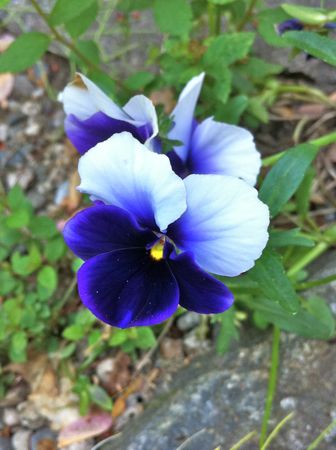 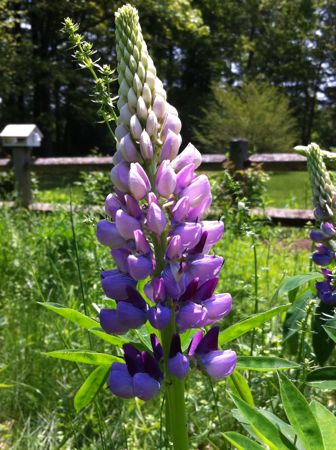 Let’s not quibble and include purples, too. 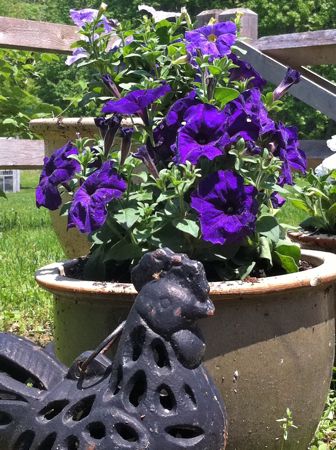 And a blue chick. 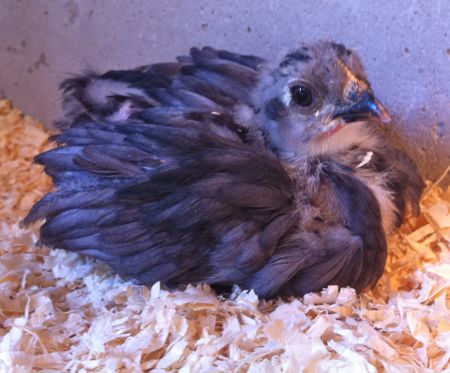 There, I feel better already.

Anyone who’s ever worked out, or watched Biggest Loser, knows that it’s important to incorporate two things into one’s exercise plan – resistance training and  aerobics to get your heart beat elevated. You could join a gym and hire a personal trainer. Or, you could get goats.

Yesterday I mucked out the goats’ stall. Shoveling and carrying a muck bucket (use your calves, not your back!) are tailor-made to build muscles. For a middle-aged woman like me, I’m sure it also helps to keep my bones dense.

After cleaning out the boys’ quarters I decided to tidy up the HenCam coop. I kicked out broody Coco and latched the pop door. Then, for a treat, I let the hens into the goats’ paddock. That meant that Pip and Caper could come into the chicken run. They like looking about where they’re not normally allowed. I went into the coop and did some more weight training and squats. As I carried a full muck bucket to the door (use those abdominals!) I almost tripped over two goats, who were eating flowers in the pots outside of the pens. I did a double-take. All gates were latched.

Lily Dog was about ten feet away, deciding what to do. She chases coyotes and turkeys that are bigger than these goats. But, the goats are her friends. They might be up for play. Rough housing dog play. Lily does have a “leave it” command. But she’s never been asked to “leave it” for big, live, moving goats. I tried it anyway, louder and more dramatically than ever before. Yelling showed that I was as excited as Lily! She went into play-bow pounce position.

And then I got to the stretching part of my exercise routine. Pip and Caper were still near the door to the chicken pen. But, they’d eaten all the flowers and were about to move on. I had to move quickly. I tried to block the goats from Lily, while opening the door, and shooing chickens away from the door, and keeping both goats within arms’ reach.

Then, I went back to resistance training. I shoved a goat butt towards the open door. If you push a goat, the goat pushes back. The goat never, ever goes in the direction of the push. All gyms should be outfitted with goats. I did a little weight lifting, too. A goat on two legs, theoretically, should be easier to shove than a goat on all fours. Right?

Meanwhile, my heart rate was well elevated. Who needs step training when one is trying to juggle chickens, goats and a dog?

The new trend in workouts it to do short, intense twenty-minute sessions. Accomplished!

Once the goats were put back in their paddock, the chickens shooed back into their run, and Lily rewarded for not turning goats or chickens into shredded toys, I took another look at the fencing. It appears that the goats figured out how to pull the tab that unlatches the chicken run’s door. It’s still a mystery why they closed it after they left.

In any event, I’m sure that my goat trainers are thinking up new exercise routines. They wouldn’t want me to get bored with my workouts.

A friend in Missouri wrote to tell me that he lost a friend in the Joplin tornado. His cousin survived – huddled in the bathroom closet with his wife and toddler- as their house was smashed to bits around them. I asked how I could help. He said that the Humane Society of Missouri is taking in lost and displaced pets and that they will not go into limited-time shelters, but will be cared for indefinitely until owners or new caretakers are found. Also, the HSM has a facility for farm animals.

I’ll be sending in a donation today. It’s easy through the HSM web site.

I’d also like to send a donation to a canine search and rescue group working in Joplin. It takes years to train search and rescue dog and handler partners. Teams are funded by their members. They sacrifice family life and leave work at a moment’s notice to do this dangerous and arduous task. Does anyone know of a S&R group to donate to?