Hens crave sunlight and dirt. They like each individually. In the winter, a chicken will bask in a warm ray. A hen closed up into a coop will take a dust bath in shavings. But, for a hen, nothing is more luxurious and satisfying than sunlight and dirt together.

I have two new hens (more about them in a later post!) named Philomena and Agnes. They are twenty-weeks old, and until today have never been outside. The man I bought them from on Sunday housed them indoors, warm and safe from predators. I’ve kept them inside and isolated for a couple of days to make sure they won’t bring diseases onto the property.

Today, while the older hens were outside foraging in the lawn, I let Agnes and Philomena into the yard of the big barn. They each took two steps onto the hot, dry soil and collapsed! It was quite the dramatic flop into the dirt and I imagine that a new chicken keeper would have panicked. 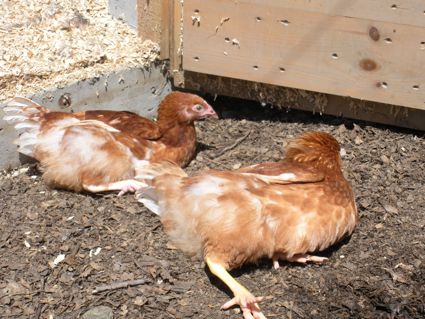 Here they are, in a pile of feathery ecstasy.

There’s a health reason behind this chicken “spa treatment.” Dirt worked under the feathers and rubbed onto the skin, kills external parasites. Sun bakes out diseases. My old poultry books all talk about how the “village hennery” will have healthy chickens if there is access to a clean yard and sunlight, but diseased birds if they are holed up in damp, dark quarters.

My new girls certainly don’t think about that – they simply instinctively know to sprawl out in the sun and relax.

On Saturday, there was a break from this dreary rain. I went to work in my vegetable garden. Lily did her work of keeping the squirrels off of the feeders and keeping the rabbits out of the meadow. Scooter did what he does – he sprawled out in the sun and relaxed. I was bent over the lettuces when I heard Lily do her alert bark. It wasn’t the “a dog is on the street” bark, or a “the FedEx truck is here” bark. It was a “there’s a predator” bark. I looked up just in time to see a very big bird flying not even ten feet off the ground, away from us and into the woods behind my small meadow. Lily stopped at the fence line. The bird did not. It couldn’t fly fast through the low branches, but it sure didn’t stop. I hurried out of the garden to look for Scooter. He was unconcerned and still having his sunbath.

That afternoon, we were back out in the yard. Lily came bounding and prancing out of the meadow. She had something in her mouth. I traded her a dog biscuit for it. It was a huge. The tip was damaged. I think that Lily must have just about caught that bird in the morning. I think it’s a wild turkey feather. They’re bad-tempered birds and can be aggressive.

Here you can see how big the feather is compared to Scooter. He’s one lucky dog to have Lily protect him. GOOD DOG, LILY! 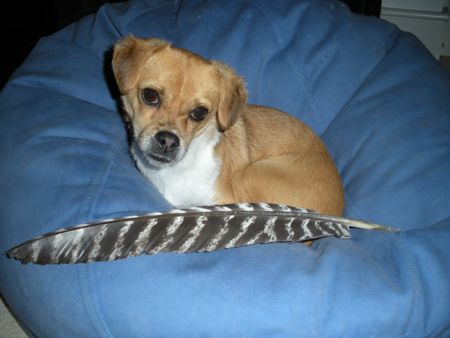 I’ve joined Facebook. I didn’t want to, but in order to access a party invite, I had to join. I’m still not sure how I feel about it. A writer doesn’t need more, easy ways to procrastinate while sitting at one’s desk. And, I feel guiltily voyeuristic following the lives of people that I barely know. Still, it’s a casual, quicker way to communicate than my blog. I’ve got some fun events coming up this summer that I can announce on Facebook (heads up HenCam fans in Los Angeles, I’m headed your way and am planning a party!)

I also feel a bit awkward posting on Facebook. It’s a culture that I’m not familiar with. It has rules. My teenage son informs me that unlike the word, google, that facebook is not a verb. So, although I can say, for example, that “I googled for directions,” that  when I am typing on Facebook, I’m not “Facebooking.”

Still, I am registered. I check my page daily (and often more frequently) and I need friends. Anyone interested?

The “little pond” here at Little Pond Farm was built six years ago. At the time, I imagined beautiful koi gracing the serene water feature. Koi are expensive and I had no experience with them. So, I bought a 2-inch koi for only $3.00. I liked that it was white with a big black spot on it’s head. Distinctive, like a paint horse. It grew and grew, but the spot didn’t. Now, that koi is huge and all pale peach in color and looks like an ugly, plain catfish.

I also put a few cheap goldfish in the pond. They haven’t gotten as big as the  koi, but they have kept their pretty markings. They’ve been breeding, too. Last year, a neighbor’s fancy goldfish were all eaten up by a Great Blue Heron. It took some doing, but we managed to catch several of our biggest goldfish and restocked our friend’s pond. We still had plenty of small ones that were sure to get bigger soon enough. They have.

We’ve had a Heron here, too. I don’t mind, we have too many small goldfish in the pond, anyway,  and the Heron is a gorgeous, shy bird that I’m happy to feed. I’m not worried about the koi. If that fish were a trout, it’d be the one that the fishermen tell tales about. It’s wily and sure to outlive us all.

The lily in the pond bloomed today. Isn’t it a beauty? Next to it is the beast. 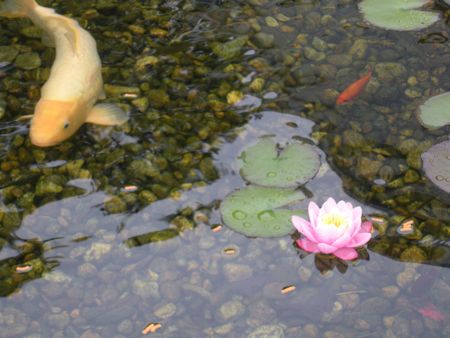 Most of the animals that we choose to live with have life spans shorter than our own. As youngsters, we often start with hamsters and guinea pigs. Sometimes called “pocket pets,” they never outlast a childhood. Dogs are longer lived; but you go into the relationship knowing that the entire arc of their lives, from puppyhood to grey muzzles. will be seen on a fast-forward button in comparison to our own, slower trajectory.

There’s a built-in sadness to seeing animals age, but there is also the pleasure of familiarity – there’s an understanding of who they are that one gets only with time and observation.  As I step outside, I know exactly where Marge is by her raucous clucks. No other chicken sounds like her. Lulu’s crazy antics no longer hold the element of surprise, but  continue to have me shaking my head and smiling. (So, when I see her sail out of the coop’s window and hit the fence before landing, and then hurry off as if nothing has happened, I don’t panic. It’s just Lulu finding a Lulu-like way to exit the coop.)

The animals that keep me company are getting old. I nursed Eleanor back from death’s door last year, and now she is ailing again, but this time, it is likely arthritis from old age that is slowing her down. Buffy, saved from a flock that bullied her five years ago, and having recovered from a mystery paralysis last year, is now the grand dame of the coop. She struts stately around the yard and is unflappable. Even Lulu doesn’t annoy her anymore. I honestly don’t know how long my old girls will continue on. They’re not laying many eggs, but I like having them in the backyard. I like knowing them.

Candy is the animal that I worry most about. She’s six and half-years old. Lately, she’s been showing her age. Her weight is good, but her bones are more prominent. She’s less playful. She takes long sun baths – I think to ease arthritis. This is sad, but there’s also an upside. In her old age she’s learned to enjoy it when I scratch her behind her ears. She likes gentle stroking on her back. She relishes the fresh timothy grass that I hand feed her. She’s mellowed out. Sometimes she plops herself in the middle of a group of chickens. They all laze about in the sun companionably. I watch those moments with appreciation – I know they aren’t going to last forever.

And then there are the goldfish. I have a six year old koi. Probably the ugliest koi ever. It is big, white and ungainly and lives outside in my small pond. A great blue heron often fishes there, but this koi is too big and savvy to be harmed. Yesterday I read that koi can live to be 200 years old. My son’s grandchildren might be caring for this fish! It’s a nice thought. But I still want dogs, chickens and rabbits, despite the fact that I know they won’t be here forever.