Yesterday was the first day since last January that I didn’t collect a single egg. There’s a number of reasons for this lack of production – the primary one being that the hens are molting (or moulting as it is spelled in Great Britain). Once a year, usually in the Autumn (though there’s always one hen to prove this rule wrong) hens lose their feathers, look terribly scraggly and bare, and then grow a new coat. These new feathers, are appropriately called pins or quills, because that’s just what they look like! Never fear, they will unfurl into a lovely insulated feather coat just in time for winter.

The molt lasts up to 6 weeks. Between that and the lack of daylight hours, my hens take a break from laying eggs until February. Before factory farming, this was true for all of the northern states. Eggs used to be a seasonal product and were quite expensive in the winter.

This year, I’m experimenting with leaving a bulb on in the big barn so that the hens get 14 hours of light a day.This should get them laying right after their feathers grow in. Already, a few are almost done molting. I’m hoping to not have to buy eggs at the market. Somehow, it just doesn’t feel right.

A Hencam viewer sent me this pic this morning. 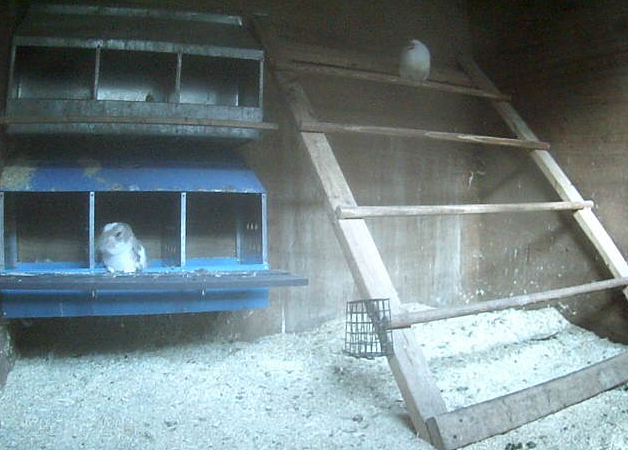 Speaking of characters… people tend to select the breed of chicken they want by looks and egg color. But, if you have backyard chickens you quickly learn that beauty goes beyond skin deep! Just like there’s more to the difference between a Great Dane and a Rat Terrier than size, there’s more to the difference between, say, an Orpington and a bantam White Leghorn than feather color. Breeds vary, among other things, by activity level, boldness, broodiness.

Then there are the individual animals in a class by themselves. I have 13 hens. Eight breeds. But, of all of the chickens only one ventures down the paved driveway. Only one explores the dark garage. Only one goes off into the woods by herself. Only one paces the fence-line at dusk when everyone else is settling in for the night. That one hen, of course, is Lulu, the Speckled Sussex. Would I want a barn full of Sussex? Heavens no! But I can’t imagine a flock without this character. Isn’t it true that sometimes the most troublesome pets are the most endearing?

Fallen maple leaves blanket my front lawn. The farmers’ market season is almost over, but it seems as if all of the vendors have bushels of apples, and that means it’s PIE SEASON. Around here, we have a number of apple varieties that are perfect for baking, including Cortlands and Baldwins. But, really, any apple will do. All year, I collect recipes from magazines and cookbooks and then I don’t use them. I can’t help myself; there’s really only one way that I like to make an apple pie and I will share it with you here:

I make my pie crust. If you don’t have a favorite recipe, use mine from The Farmstead Egg Cookbook. (If you are truly inexperienced with pie crusts, double my recipe. It’s easier to roll out a crust when you have too much dough, rather than too little.) Or, if crusts intimidate you, buy a frozen one. You can find decent crusts in the freezer of some farm markets or Wholefoods. Just don’t let a fear of pastry keep you from making pie. That said, pie crusts, like bread baking, are all about feel. Practice, don’t worry about perfection, and you’ll get it. Have the bottom pie crust rolled out and in a 9-inch pie shell. Keep it refrigerated while you work on the apples. Preheat the oven to 400 degrees F.

Core, peel and slice about six large apples so that you have about 6 cups. And then maybe a couple of more apples just because. I have one one of those old-fashioned hand-crank corer/peeler/slicer gizmos and I couldn’t get through the season without it. Put the apple slices in a large bowl.

I don’t like my pies very sweet. A perfect pie has just the right balance between the sharp tartness of the apples and the sugar. Get out your sweetener. I’m purposely not being exact here. Sometimes I use plain white sugar -about 1/3 cup. Or a half cup of brown sugar. Or 1/4 cup of white sugar and a splash of maple syrup. If the pie isn’t sweet enough, you can always serve it with ice cream. What’s important in this step is to also get out whatever thickener you’re going to use. I like instant tapioca or tapioca flour- about 2 tablespoons, depending on the moisture content of the apples. Or, use a gel made just for pies. Or, the traditional couple of tablespoons of white flour. I don’t like cornstarch which makes things gummy-gooey. The idea is to hold the pie together and absorb extra liquid without the thickener being obvious in flavor or texture. Toss the thickener with the sugar. If you add the thickener to the apples later it will clod up.

Now, toss the apples and sugar and thickener mixture together. Add something of interest – perhaps minced crystallized ginger, or cinnamon, or dried cranberries, or a handful of walnuts. Or all of them! Or none. Put the apples into the pie shell and mound up in the center an inch or two above the rim. Roll out the top crust and place on top. Crimp the edges together. Slice the top (I do a decorative star pattern) so that steam can escape while the pie is baking. For a pretty crust, brush with milk and then sprinkle on sugar. The raw, pourable brown sugar looks nice, as does white sanding sugar. (Made for cookies – The King Arthur catalog is a great source for these things.)

Place in the oven for 15 minutes, then reduce the temperature to 350. Bake until done, which will be about an hour altogether. You’ll know it’s done when the insides bubble and the crust browns. But, since different pie plates brown the crust at different rates and since ovens are often inexact, and if you were using a frozen pie shell it will take longer… the best way to know when the pie is done is by smell. The aroma of a baked apple pie is simply different than one that isn’t ready yet. And the best way to learn what that wonderful aroma is by experience. So – off you go to bake lots and lots of pies! Enjoy and let me know how your pies turn out.

Here’s a short synopsis of how an egg is made: a yolk is released from the hen’s oviduct. As it winds its way down various tubes, the yolk is surrounded by white, then membranes, then the shell and then the protective cuticle. The hen, now ready to lay, sits in her nesting box and pushes out the egg. She chuckles in a proud way, and then usually (unless she is broody) goes back outside to enjoy her day. This entire process takes about 25 hours and hens under two years old tend to do it day after day (older hens aren’t as prolific.)

If you only shop in supermarkets, you might think that all eggs are exactly the same, but those of us with chickens in our backyards know that eggs are not always perfectly uniform. As with any living process, there’s room for variation. Sometimes there’s a bit of squiggly shell, or a blotch of color. Some eggs are pointy at both ends, and some are too big to fit in an egg carton. Once in awhile, an egg will be double-yolked. I’ve found eggs without any yolks at all!

But this is the weirdest egg I’ve ever collected from a hen: 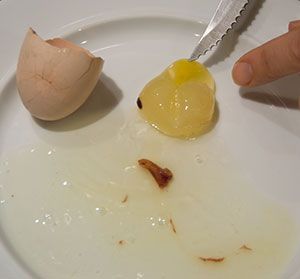 It was jumbo-sized, thin-shelled and had odd, raised bumps on the shell. Cracked open, there was a big blood spot and a white that was quite firm and opaque. When I cut that white open, there was yet another, denser white, inside of it, held together in a membrane. It looked like one egg had been formed inside another, except there was no yolk at all.

I don’t know who laid it; Lily Dog didn’t care. She said it was yummy.

…with these goats at the Fryeburg Fair last weekend: 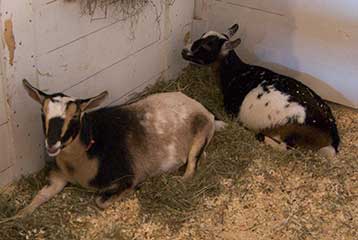 They are Nigerian Dwarf Goats; the breed is a mini-version of a dairy goat. About 50 years ago dwarf goats were imported to the States from Africa. Two lines have developed from that original stock. One is barrel-chested and stocky and used widely in petting zoos. I hear that they are escape artists, bossy, mischievous. Fun, but too much trouble. The other line is used on small homesteads that want to have just enough milk for a family. These goats, though still with that humorous goat-nature, are more docile. They’re also, I think, more elegant and have a kinder eye. I like their leggier proportions. I think they’re beautiful. But then, I’m a woman in love.

We are thinking about getting two wethers (gelded males) in the Spring. Am mulling over fencing options. Anyone out there have experience with these goats? Know a good breeder?