I have a beautiful backyard. There’s the water feature, perennial flower bed, strawberry patch, herb garden, vegetable garden, shrubs, trees, and of course, the chicken coops and lovely chickens. What I don’t have is a nice lawn. Mostly, it’s crabgrass.

I won’t use herbicides because of the koi, dogs, chickens and kids, dragonflies and toads. I know that I need better soil, and I’ve already spent a lot of money on more loam and lime, punching those holes in the ground, over-seeding and organic fertilizers. I’ve tried the corn gluten treatment, which is supposed to inhibit crabgrass germination, but the dogs eat it, so I couldn’t do the required seasonal treatments.

The lawn is too large to weed by hand, but I do that anyway. I get a perverse pleasure from digging up crabgrass. The other day, I pulled some up and there were a half dozen grubs in the soil underneath. Yuck. So I started pulling up big chunks of turf. More grubs. I couldn’t stop and cleared whole areas of grass. Now there were patches of dirt — and grubs.

Obviously, I couldn’t take care of this grub infestation alone. I called in the clean-up crew – my chickens. Yesterday, I let Edwina, Ginger, Snowball and Twinkydink into the yard. I kept the dogs inside the house and kept an eye out for the hawks. The girls were ecstatic and clucked off happily into the leaves and the flower bed. Which is not where I wanted them. I wanted them to be eating grubs. Working.

I picked up Ginger and Edwina and put them next to me where I was pulling up crabgrass. Chickens are easy to train because they are so very food motivated. I made a kissy noise when I found a grub. I tossed it to them. In less than a minute the girls were scratching around me and running over when I called them to get the grubs. This was far easier for them than hunting for their bugs! They were delighted.

When done for the day, I was a bit concerned that it would be hard to get the girls back in their pen, after all, there was a whole wide yard of yummy things outside. But chickens are easy. I got a cup of corn, rattled it and called to them. The grubs were forgotten. That’s the nice thing about chickens – their optimism – there’s always something better around the corner.

I’m afraid that my battle against the lawn grubs is never-ending. But at least I have good company while out there.

Farmers who are raising animals on pasture face numerous challenges, not the least of which is how to distinguish their product in the marketplace. The USDA is working on standardizing terms for “grass-fed” and “pastured” for poultry and beef. Unfortunately, it appears that the big players have already co-opted those terms, making them useless for the farmers who are committed to raising their animals on grass, outside, from birth to death (or, as it is euphemistically called, “harvest.”) Much of the “grass-fed” beef (and bison) comes from animals that were on pasture for only a few months, and then finished with grain.

Last week, I got to taste true grass-fed beef, raised by Burgundy Pasture Beef, owned by the Taggart family, who ranch in Texas. I tasted their steak in a blind taste test; the other product was corn-fed beef. Neither was tough (as grass-fed is often accused of), but the grass-fed had wonderful flavor – beefy but not gamey. The corn-fed beef was boring.

The Taggarts have worked hard to get a consistent product. Raising beef like this isn’t simply a matter of letting animals stay outdoors. The Taggarts pay close attention to the quality of grass in their fields; they don’t overgraze. They use a cattle breed that produces the sort of beef they want. Their animals are slaughtered much later than grain-fed beef, so that the meat gets a layer of fat and marbling. They also cut and age the meat themselves in a state-of-the art facility. The taste I had was exceptionally good.

Although they don’t have the economies of scale and the quick turnover that the feedlot producers have, Wendy Taggart pointed out that they are also not at the mercy of rising grain and fuel costs. In the long run, they, and their customers, should do just fine.

The folks at The Annals of Improbable Research sure do know how to combine science and silliness. It turns out that some real research was done on chicken roosting behavior – and so it is the topic of Improbable’s monthly limerick contest. Here is a sample:

A chicken that wants to get plump
Will often be ready to jump
But one that’s well fed
Will not be misled –
It clucks but just sits on its rump.

Are you inspired? Send me your chicken poetry! You just might see it posted here on the Hen Blog.

I’m back from a conference in Dallas, with experiences enough to fill several blogs. Today’s blog will be about the food at the Texas State Fair, where the corn dog has been elevated to an art and where vendors vie to create the next best fried food. I was so overwhelmed by the fried food choices that I made a list. Here is a partial recap:

I confess to avoiding all of the fried food. I had a very good bowl of beans with a side of cornbread and a classic, homemade sweet potato pie.

Unfortunately, it was beef day in the livestock barns and I missed the poultry show.  BUT the midway had a booth where every prize was a toy chicken! I won a chicken key chain.

Here’s early proof that there is an Easter Bunny! 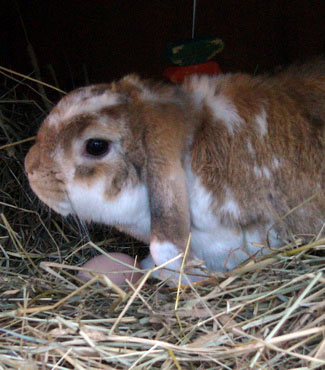 For the next few days I’ll be away at a conference. One of the seminars I’m going to is a taste-test between grass-fed and corn-fed beef. I’ll tell you what I think when I’m back next week.