I’m about six weeks into the six-month KPA Dog Trainer Professional Program. This is mostly an on-line course, and it entails both  theory and hands-on training. In order to take the class you have to have access to a dog that has not yet been trained. That means that I can’t use Lily. Luckily, I do have a dog at home that has not been taught much of anything. Scooter. 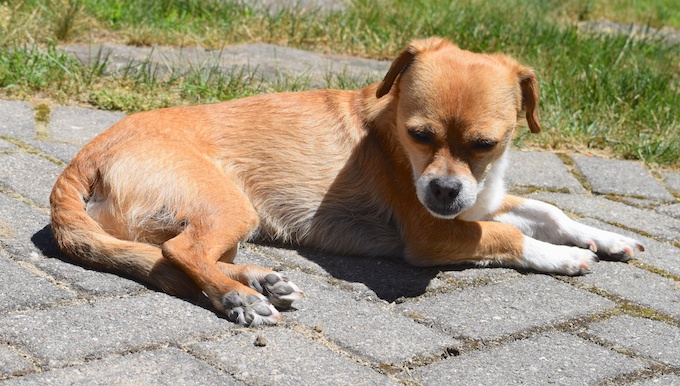 Yes, he’s house-broken, and he has some manners, but I’ve never trained him to do anything, not even a basic “come” or “down.” Why bother? For the life that he has here at home, he’s perfect. It’s come as a bit of a shock to him that he has to work for yummy things, but he’s getting enthusiastic about the program. So far, he’s learned to lick his nose when I say snack. There’s a point to this exercise – it’s an opportunity to learn how to capture an innate behavior and put it on cue. Besides, it’s cute. I taught Lily to do it, too. Now, when I say snack! both dogs lick their lips. I’ve also taught Scooter to sit (which can be quite a challenge for a tiny dog built as he is) and go lie on a mat, and go into a travel crate. He also jumps into a box. I’ve managed to teach these behaviors and put them on cue despite the fact that Scooter is truly, I do not exaggerate, a dog of little brain. Hence the need for frequent sun-bathing breaks, as seen in the above photo. I don’t want to stress him out.

Along with doing the on-line program, I’m part of a small group that will meet four times. We’ll be training together, and working with an instructor. I’ve no idea how Scooter will react. Each time, he’ll be away from Lily for two days. He’ll be around other dogs. He won’t be sun-bathing. But, he’ll be getting lots of treats and attention. At these workshops I’m supposed to be show off all that he’s learned. However, he’s not a dog that goes places with me. He stays home with Lily. I’ve been teaching him in the familiar surroundings of our house. I fully expect that the behaviors won’t be as solid at the group session, but I’m hoping that at least it will look like I’ve done some training. I’m not sure how much Scooter’s little brain can hold. Our first group session is today and tomorrow. Wish us luck!

As the course title states, it’s focused on dog handlers, but good training methods are applicable to all species.  Sometimes, you can learn a lot about your own skills, when the emotional baggage that you carry around and attach to your dog is removed. One class exercise is to train a species other than a dog to do a behavior that it already does, but to do it when asked, on cue (this is another “capturing” lesson). These training methods rely entirely on positive reinforcement, which, for this exercise, I would have had to use anyway, as I trained a fish, and you can’t exactly punish a fish that isn’t doing what you want. Here is a video.

Another exercise required that I teach a non-dog species to do a behavior using the technique of shaping. Shaping is when you have a trick in mind, and you break it down into very small components, and then you build up and reward each step. There’s no luring. There’s no placing the animal where you want him. It’s all about observing the animal and rewarding incremental movements until you shape the whole behavior. I trained Caper to stand on a plywood square with his two front feet, and to wait there until released. Caper is a genius and he is totally fun to work with. He’s engaged, he’s cheerful, and he never gets frustrated. He works for pieces of carrot and an occasional peanut. (Whole with the shell. Crunch.) Here’s a video of Caper being brilliant.

If I could do the course with Caper, I’d be done by next month. But, most exercises are to be done with a dog. In my case, with Scooter. This little dog is quite the challenge, but he’ll make me a better trainer! 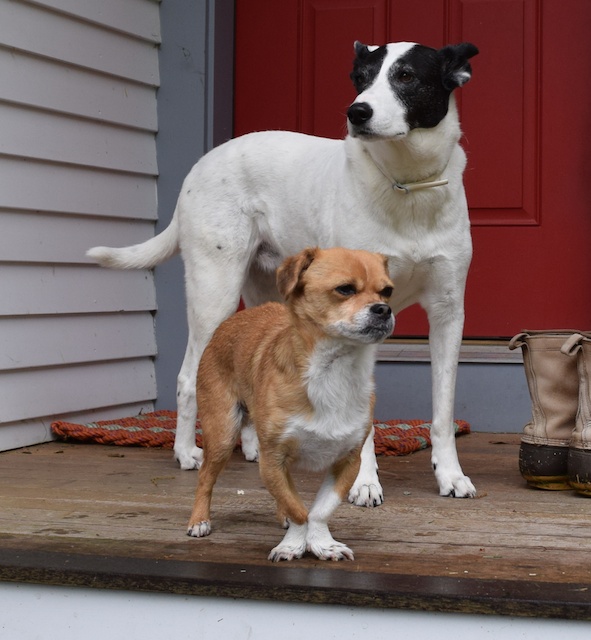 (In case you’re wondering, Lily is not left out. I do some training just for fun with her after I work Scooter. She puts her toys away, crawls, does a figure eight, bows, etc. etc. I haven’t worked with her in ages, and she is thrilled to pieces that I’m dusting off the old tricks. Also, FYI, the next time there’s a non-dog behavior to teach, I’ll use Tonka!)