A dozen eggs bought at the supermarket are all the same, smooth and identical in shape and color; any variation that does occur is sorted out by machines and by workers in the factory and don’t end up in cartons. In contrast, the eggs from our own backyard hens are a varied lot, which is no surprise as our chickens, unlike the ones in the commercial production facilities, don’t look alike. The eggs in our cartons are as unique as the birds that lay them.

On the most basic level, breed determines the color of the egg. You can try to select your backyard hens with an eye to what your egg basket will look like, but it doesn’t always go as planned. But, each hen has their own genetic makeup, and don’t always follow the rules. I got a Welsummer because they are known to lay chocolate-colored eggs. My Welsummer, Jasper, lays beige eggs. It’s my Rhode Island Red that lays deeply brown eggs with speckles.

How the egg becomes colorful is fascinating and complicated. It takes about 26 hours for an egg to go from the ovary until it is laid. First the yolk is encircled with whites and membranes. Then this jelly-like mass goes into the shell gland, where it will spend about 20 hours while the shell is formed.

The shell is made up almost entirely of calcium carbonate, which is a white mineral. White eggs are white, through and through. But, during the last four to six hours in the shell gland, a brown egg-laying hen adds pigment to the mix. This is why the insides of brown eggs are white – the egg starts out white, and gradually becomes more colorful. In the last 90 minutes, the rate of shell formation slows, and the cuticle, a viscous, protein-rich fluid (also called the bloom) is added. (The cuticle is the first line of protection against bacterial infection in the egg.) This is also when the hen secretes most of the pigments into the shell.

A lot can interfere with this process. If a hen is stressed, she’ll release a hormone that ceases the cuticle formation and so her shell color will be pale. Some viral diseases can decrease shell color. Certain medications can impact pigmentation. The size of the egg can affect color, too. The hen is genetically programmed to make a certain amount of pigment. If she lays a very large egg, there’s less pigment to go around. As a hen ages she becomes less able to synthesize the pigment and so her eggs will lighten over time.

As the egg moves down the passageway it rotates. If it goes slowly, the egg will have dark speckles. A notch up in speed and there will be streaks. Sometimes it will look chalky. Sometimes, half of the egg is darker than the other, and it appears to have been dipped in dye. This is because the egg moves through the passage round side first. That end, pushing through, has more contact with the papillae that excrete the pigment, and thus it’s laid on with more pressure.

This process is even more complicated for blue egg layers. Blue pigment is a different chemical than the brown. It’s scientific name is biliverdin, and it is derived from hemoglobin (a component of blood.) It is metabolically costly for the hens to create. A recent study of Blue Footed Boobies show that the blue color will become even more pronounced with an increase in carotenoids in the birds’ diet. (I’d like to see a teenager do a science fair project with their Araucanas to see if they can replicate this work with chickens!) Biliverdin is added to the calcium carbonate earlier in the shell-making process, and so the eggs appear blue all the way through. Chickens that lay greenish, gray, or dusky blue eggs produce both biliverdin and brown egg pigments. The brown overlays the blue.

It’s been said that the brown pigment can be removed. When an egg is first laid it is still damp. In the short window of time while it dries, the cuticle can be rubbed off, and so much, but not all, of the brown pigment along with it. Certain breeds (and some individual hens) deposit pigments in the last few minutes of shell-making, and so, it seems as if it’s just dye to be wiped off. But, scrubbing removes not just color, but also the all-important bloom and calcium carbonate. Because I’ve heard so much about the permanence/impermanence of shell color I did some experimenting. I wiped, I used abrasive baking soda, I used a stiff brush. Some eggs lost some pigment. Some lost none. As you can see, none became white. 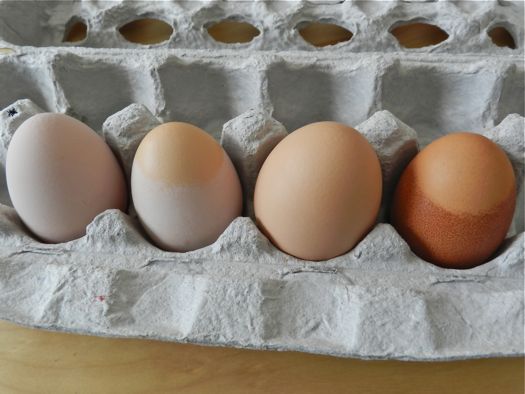 But, I do rather like the egg that looks like it has a bald pate. Perhaps I can start a new trend in Easter egg decorating?