People who are new to hen-keeping are often shocked to one morning go to feed the chickens and discover that their favorite, placid, friendly hen has turned into Chookzilla. This happens when a hen becomes broody. She wants to be left alone to sit on her nest of eggs. No matter that there might not actually be eggs under her. Or that the eggs that are there aren’t fertile. Or aren’t hers. Or you collect the eggs out from under her. Her body tells her little chicken brain to set, and she does.

She also turns into crazed hen. Her feathers stick out. She looks twice her size. Instead of a gentle happy cluck when you come into the barn, she rasps an angry greeting. A hen who has always been pleasant to the others will go out of her way to chase them.

Unless you want to hatch chicks under your hen, when she goes broody it is a big pain. Not to mention that she stops laying eggs. If you have only a few hens, you’ll certainly miss that egg at your table.

What to do? Try to break up the broody spell by unceremoniously kicking her out of the nesting box and tossing her out into the yard. Try to bring her body temperature down (it elevates when she goes into broodiness, and being cooler will signal a cessation.) Some people put a bag of frozen peas under their broody hen! Or put her in a mesh-floored pen for a couple of days (with food and water, of course.) Or, simply leave her alone and have boring cereal for breakfast.

Blackie is broody and doesn’t she look annoyed at the world? 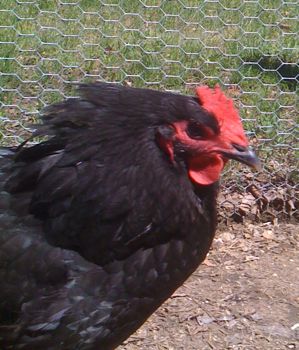 Buffy, who mysteriously fell ill at the beginning of April, and who we all thought was a goner, seems to be having a miraculous recovery. Not that she’s 100% – but she’s alive and making progress everyday.

Two months ago Buffy showed sudden weakness in her legs/thighs to the extent that she couldn’t stand for more than a second or two. Cancer? Some internal organ disease? If it were any of these, we’d have seen a quicker change for the worse. It was suggested that perhaps she ingested something toxic. We do have vetch growing in the meadow, which can cause symptoms, but usually they’re more severe and lead to death. Perhaps a mold on some wild bird food that she got into? In any event, the treatment for eating something they shouldn’t, is to douse with epsom salts. There’s some excellent info at the Mississippi State University web site. So, I mixed up a teaspoon with an ounce of water and, using a syringe used for human infants, poured it down her throat. The idea is that the salts will settle in the gizzard and flush the system of toxins. It might have been too little too late to effect a sudden cure. However, today Buffy was sitting in a nesting box. She didn’t lay, but she did think about it. Just getting up there was something she couldn’t have done a few weeks ago! She’s also standing, albeit wobbly, for longer periods of time. The best indication that she is feeling better is that I saw her peck at another hen. Just because.

Meanwhile, LuLu got lost in the woods, and unfortunately, it was my dog Lily who brought her back. Lily doesn’t have the soft mouth of a bird dog, being mostly terrier, but she does have enough Border Collie in her to bring the hen into the yard. LuLu was a traumatized mess. Amazingly, although Lily had managed to pluck her of half her feathers, there was only one small puncture wound and some bigger skin wounds. She is now in the “infirmary” (a spare stall) and is recovering quite nicely. A chain drug store has everything you need for this sort of nursing. This is what I did:

LuLu is now bedded on shavings, has the stall to herself and has a roost. Of course, food and water. She’ll be there a long time, until her feathers grow back. I hope they do! Chickens are vicious about pecking at bare skin. LuLu is alert, calm and doing fine. She’s eating and drinking and pooping. I’m thinking about putting Buffy in with her for company. I’ll keep you updated…

…I let the girls out for a free-ranging session and after some desultory scratching they go back into their pens and sit panting in the shade.

Yes, chickens pant. They open their beaks and look as if they are gasping for air. They will also fluff up and hold their wings a bit off their bodies. If you are new to hen-keeping don’t panic! It’s in the 80’s here today, and humid. Hot, but not life-threatening. The hens have what they need to stay comfortable and healthy. They have shade and water. I even put ice cubes in their waterers. Also left a pile of ice cubes on the ground. They’ll melt and give them cool dirt to sprawl in. A fan is blowing on the nesting boxes in the HenCam barn because it gets stuffy in there.

The animal I worry about in this heat is the bunny. While I write this, she is surrounded by hens in the shade (not in view of the camera) on a pile of loose leaf compost under her hutch. The dirt there is cool on her belly. I’ve also put plastic bottles with frozen water in Candy’s hutch for her to lean against. Once in awhile in the summer, when the temperature reaches near 100, I’ll bring Candy inside to enjoy the air conditioning. (She used to be an indoor bunny, and is litter box trained, but she far prefers the company of chickens!)

People who don’t have chickens, but want them, often have this bucolic fantasy of a small flock of hens cheerfully clucking in their gardens. Did you know that hens cheerfully cluck in order to announce that they’ve found something to eat? Luckily for us gardeners, they love the bad bugs, especially grubs. When one hen finds something, they all come running over to see. However, it’s rather like the 1849 gold rush. A mass of undisciplined miners. Soon, everyone is digging. Dirt is flying. Then, they move on. To continue this analogy, what’s left are piles of slag, or, in the case of my garden, lovely mulch that was carefully spread around the perennials is now strewn across the grass.

Chickens also like to take dust baths. They find nice, loose dirt (of course, the best is right where you planted the basil) and they make a hollow, kick it up to make it even looser and lay down and luxuriate. I’ve got 11 big fat hens, but when I let them loose in the garden, it might as well have been a dozen warthogs for all of the damage they can do.

There is such a deer overpopulation problem that gardeners here in the northeast purchase plants that deer don’t eat. Perhaps those of us with hens need to do the same to discourage the chickens. I have a delicate, native nodding onion. It flowers briefly, but is the prettiest thing. I won’t see the flowers this year. The hens decided that they like onion.

My vegetable garden is fenced off. And I probably shouldn’t let them in the yard. But it is so satisfying to see them cheerfully clucking…