Problem 1:  Chickens need to get plenty of fresh air and exercise. They need soft dirt to scratch in. They do best on a varied diet that includes greens and bugs. In the summer they need shade and some cool earth to lie in. Much of the day my chickens are confined to a packed-dirt pen. It’s not optimum.

Problem 2:  Every day, I fill a bucket on my kitchen counter with the scraps from my kitchen endeavors. There are onion peels, over-toasted waffles and carrot scrapings, coffee grinds and desiccated oranges. I’d like the hens to get the good stuff, but even chickens won’t eat all of it. How to feed the chickens the worthwhile bits and compost the rest without sorting through these dregs? I have other stuff to compost, too, including weeds and damaged vegetables from the garden, and the muck and trampled on hay from the goat stall. There’s a lot of material from different sources, but I don’t want to fuss with it. I want one easy pile.

Two problems, one solution: build a compost bin in the chicken run. The hens will eat what they like, and shred everything else into little bits. In the summer it becomes a cool, damp respite from the heat. In the winter it’s the one spot that’s not frozen that they can dig in. At all times there are yummy morsels to eat and bugs to unearth. It’s barely any effort for me – the chickens do all of the work of mincing the material and turning it over. Soon enough, it decomposes, shrinks in size, and it turns into good garden soil.

I’ve sited a compost area to the side of the little barn. I’ve put a sturdy piece of fencing blocking it off, but have left openings on both sides. The two exits ensure that the hens don’t get trapped in a corner or bullied. 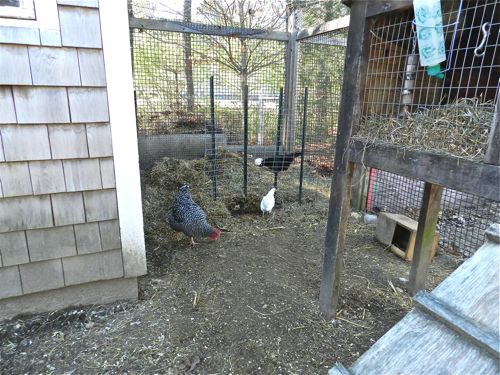 If you don’t see the chickens on the HenCam, this is where they are. 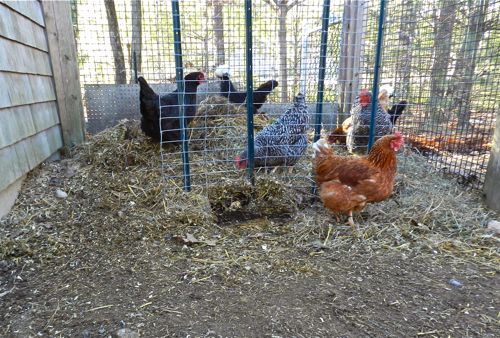 The rest of the chicken yard I keep raked and tidy. As I mentioned in a previous post, I compost the chicken manure elsewhere. I move that away from where the hens live, so that I break any potential parasitic lifecycle.

Early in the springtime, the compost gets forked out. Later in the summer, when it fills up again, I’ll shovel it out once more. 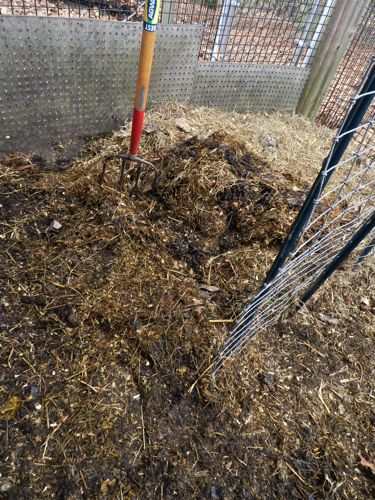 The bottom is dark brown, rich earth. The top isn’t fully decomposed, but that goes, too. There’s a big patch in the meadow where nothing grows because the soil is so thin and poor. The compost is dumped there. While doing this chore, the chickens are allowed out, and they help to spread it. 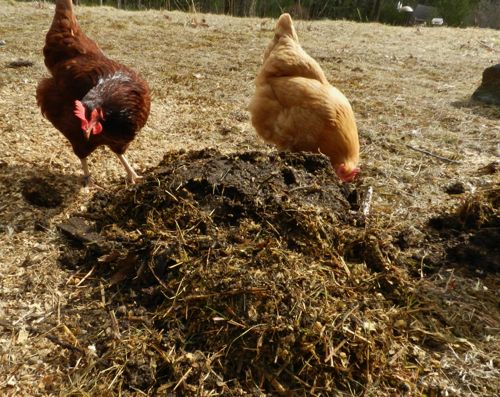 Four years ago I created a pumpkin patch in the meadow with with compost from the chicken run. Look at how beautiful the soil there is now! The hens are busy eating up overwintering garden pests. Good work, girls! 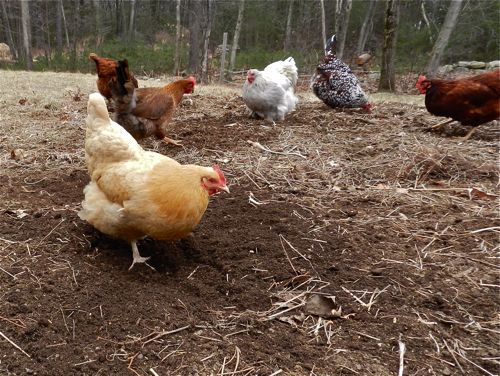 You can see all of this in person. There’s still a few remaining slots in the Chicken Keeping Workshops. Come either March 31 or April 14.